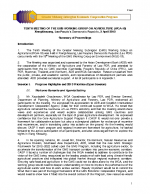 The 11th Meeting of the Greater Mekong Subregion (GMS) Working Group on Human Resource Development (WGHRD-11) was held in Yangon, Myanmar, on 1-2 November 2012, with the theme "The GMS Human Resource Development (HRD) Strategic Framework and Action Plan (SFAP) 2013-2017: Responding to Emerging HRD Priorities." The draft of the SFAP 2013-2017 was presented at the Meeting for consideration and endorsement of the WGHRD.

The SFAP 2013-2017 builds upon the achievements under SFAP 2009-2012 and responds to emerging HRD priorities in the GMS. The meeting was organized by ADB and the Government of Myanmar, and attended by participants from the six GMS countries: Cambodia, the People’s Republic of China, the Lao People’s Democratic Republic, Myanmar, Thailand, and Viet Nam. Resource speakers from the public and private sectors, and the academia, as well as observers from other development partners, and individual experts also attended.