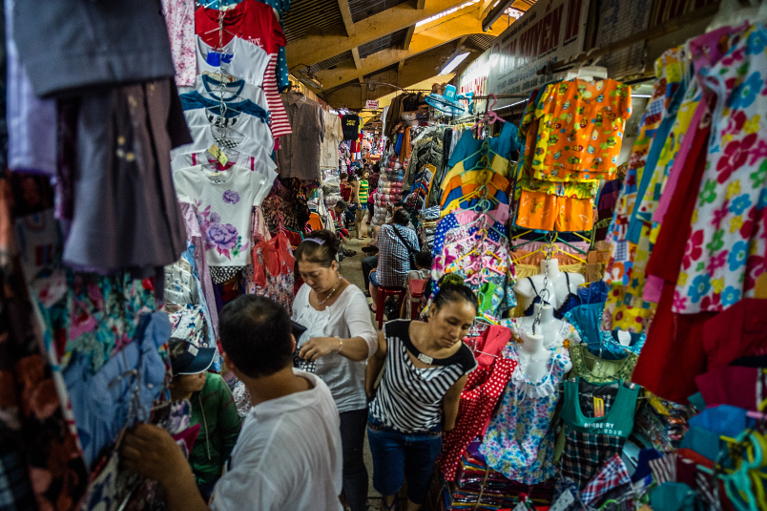 Economic corridors, like the East-West Corridor running through the Greater Mekong Subregion, are much more than just highways. They link a variety of economic activities and have wide-ranging impacts.

Le Thi Mai moves quickly through her tiny, cluttered clothing store in a public market in Viet Nam’s Quang Tri province. Negotiating prices with multiple customers at once, the flustered shopkeeper has never been so busy.

“This will fit,” she tells a young boy as she holds a tee shirt up to his back to measure his shoulders. A line of the boy’s brothers waits behind him to pick out shirts as well.

It has not always been this way for Le, who has operated this shop for nearly two decades. Before the road in front of her shop was improved, she barely got by, relying on customers from the nearby area of Ban 1 Thuan Commune, in Huong Hoa District in central Viet Nam.

“The population is low in this area, and people are poor, so it is difficult to do enough business just with the people who live around here,” she says. “We needed the road repaired to bring in more customers from further away.”

With a renovated and busy road in front of her store, she now has customers from all over Viet Nam and from other countries as well. Since many of her local customers are benefiting from the road today, they have more to spend in her shop, she says.

Le’s clothing shop is located along the Asian Development Bank-supported East West Economic Corridor, which links the Lao border with the coast of Viet Nam. The project is part of the Greater Mekong Subregion (GSM) program’s regional road system.

The subregion, which is bound together by the Mekong River, covers 2.6 million square kilometers and has a combined population of more than 300 million. It includes the countries of Cambodia, the People’s Republic of China (specifically Yunnan Province and Guangxi Zhuang Autonomous Region), the Lao People’s Democratic Republic, Myanmar, Thailand, and Viet Nam.

The East-West Corridor project is part of a GMS initiative to improve connections in the subregion through the development of economic corridors, which are areas, usually along major roadways, that host a variety of economic and social activities. This includes factories, tourism, trade, environmental protection activities, as well as other aspects of an area’s economy and social development.

Economic corridors are much more complex than a mere road connecting two cities. They involve not only the development of infrastructure, but also the crafting of laws and regulations that make it easier to do business, access markets, and conduct other activities that support trade and development in a comprehensive manner.

The East-West Corridor is an example. It runs from Da Nang Port in Viet Nam, through Lao PDR, Thailand, and to Myanmar. It intersects the North-South Economic Corridor at the provinces of Tak and Phitsanulok in Thailand.

Plans are underway to extend the corridor’s western end from Mawlamyine to Yangon–Thilawa in Myanmar, using the Myawaddy–Kawkareik–Eindu–Hpa-An–Thaton– Kyaikto–Payagi–Bago–Yangon–Thilawa route, with a possible extension to Pathein. This addresses major omissions in the configuration of GMS economic corridors—the absence of Yangon and Yangon Port, Myanmar’s principal gateway port for imports and exports, in any of the corridors.

A boon to businesses

Back at the Ban 1 Thuan Commune, in central Viet Nam, Le Thi Mai has felt the impact of a small part of the corridor she lives along. She has been able to increase the inventory of her clothing shop and expand the selection she offers. The increased revenue has meant that she has been able to better support her three children, and supplement her husband’s income.

“This road has changed our neighborhood,” she says. “This is a busy, modern area now. More people have money to spend.”

Explainer: What is an Economic Corridor?