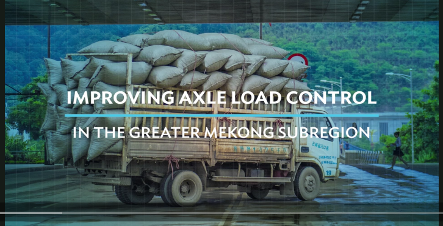 A study looks at the costs of overloading and how improved policies and enforcement can give an economic boost to Mekong countries.

This case study was first published by Development Asia.

An overloaded axle is a major problem for road maintenance. It affects all road users in terms of damaged pavements, slower speeds, and higher vehicle operating costs.

The operator of an overloaded truck gets a higher net revenue per trip, and by accumulation over multiple trips, a higher rate of return on capital investment. He can undercut competitors’ prices and expand his operations at the expense of damaging public assets.

A study supported by the Asian Development Bank assessed the status of axle load control in the six countries of the Greater Mekong Subregion and provided recommendations on how to increase its economic benefits through improved policies and enforcement.

The ADB study is based on interviews and used a structured questionnaire, supplemented by research in databases and thematic, periodic, and project reports.

The interviews and questionnaire were structured based on the following:

The study first examined the motivation and incentive to overload, and reviewed the  arguments by some leaders for tolerance of overloading. In many cases, enterprises in mining, logging, and building materials (and possibly rice at harvests) would not be viable in current markets without the high tolerance of excess loads and damage to pavements and structures.

The study proposes that the financial and economic benefits and costs of tolerance should be analyzed daily and distributed to all media, political representatives, and stakeholders, with the purpose of achieving a better understanding of the countries’ choices in policies and operations.

The ideal strategy for axle load control is to reduce the need and cost of enforcement. How can the need be addressed? Fundamentally, the whole legal, financial and economic system must enable each truck operator to compete to achieve a fair rate of return on investment (ROI), which will be mitigated by:

Lack of data and low demand for it

The study shows a lack of data and science and their application to enforcement and regulation. Even with paper records, much useful data could be collected, organized, and analyzed to add to the general understanding of the damage, the issues and modalities, and the possible solutions. The advances in fully automatic inspection multiply the opportunities for analysis and testing of options for improvement in regulations, operational processes, technologies, and results.

However, there appears to be a very low demand from governments and stakeholders for information, insights, and options, concerning axle load control. It seems that it is regarded by many government staff as a low-kudos policing function, in some cases exposing staff to the hostility of operators and shippers.[2] Axle load control is not recognized as a major component of real losses and potential benefits in the economy. The dividing and partitioning of enforcing regulations among agencies and levels of government disperse the authority of laws and the consistency of their application. One implication is that the concentration of power in the whole process of axle load control can improve the performance of agencies and the cooperation of users and stakeholders.

Improvements and gaps in enforcement

Over the last 10 years, investments in new technology and tightening of regulations and penalties have enabled tougher enforcement and greater respect from users and stakeholders for axle load control activities by road agencies. Regulation on the main highways has reduced the rates of overloading, from typically 30% to 50% of trucks in 2005 to 1% to 10% in 2015. The major advances have come through automation of weighing and recording, from weigh in motion (WIM) sensors, closed circuit television (CCTV) for monitoring of traffic and staff, and operations deploying improved information and telecommunications (ITC).

However, severe overloading continues in certain product trades, in the more peripheral highways and rural roads, and among the 2-, 3- and 4-axle trucks up to 12 wheels. These are generally the smaller operators serving resource sectors, with links to influential local businesses.

Users and stakeholders prefer a strategy for governments of building roads and bridges to higher capacities rather than enforcing more compliance. Since adequate budgets are not available for such investments, recurrent repairs and maintenance take large proportions of available resources, which further delays upgrading of the networks.

It seems timely to change the perception of axle load control as merely a policing and protection function as it can play a the major role in strategic planning for national development as well as sector development (transport, commerce, trade, environment, international relations). A first step would be to stimulate the activities of the existing committees and working groups in governments, perhaps by contracting non-government analyst-planners to the prime minister’s office and/or the planning and finance ministries, and empowering them as performance-based executive officers of the committees. A second step is for all government agencies to cooperate in negotiating and ensuring compliance agreements with road users and their associations and related enterprises.

The study draws attention to some gaps in axle load control operations, such as the low percentage of trucks that enter for weighing, or the high rate of overloading to less than 5% of limits, or the varying penalties between stations. These inconsistencies indicate operational defects, which could probably be solved by better leadership and supervision, and which would have immediate results in reducing damage.

Certain innovations have been proven as effective and good value for money: WIM sensors; CCTV; automatic data recording, transmission, and analysis; tests of e-tags of data on offenders and regular route operators; and tests in some contexts of outsourcing of weigh station operations.

Each of these innovations has obvious effects on the image and effectiveness of control, deterrence, detection, and on the value of damage avoided and vehicle operating costs avoided. The direct economic benefits of each innovation far exceed the material investment costs. However, the innovations in technology, facilities and human resources need consistent funding from national budgets and cooperation from the users. In turn, these positive factors depend on sustained leadership of the authorities, clear direction, objectives and indicators, and reliable evidence of threats and results.

Study results for each country

Generally, having weight control on a trunk road reduces the potential damage by 50% compared with having no controls; and better supervision and enforcement can achieve another 30% reduction. The existing axle load control system is preventing about $37 million of damage (including additional vehicle operating costs) in Cambodia, about $80 million in Myanmar, $120 million in Viet Nam, $230 million in Yunnan, and $250 million in Thailand. The marginal rates of return on investments in axle load control are more than 100% in the Lao PDR, Myanmar, and Cambodia, and around 50% in the more mature systems of Viet Nam, Yunnan, and Thailand.

The collective gain from axle load control in the GMS is about $500 million per year. It could reach $1 billion if enforcement was optimized in each country. In comparison, the gains to the violators of load limits are typically less than one-tenth of the costs to users and governments. Surely it is time for each country to grasp the economic boost from improved cooperation, controls, detection, and enforcement.

'Early Harvest' Deal on Cross-Border Transport Extended until May 2021