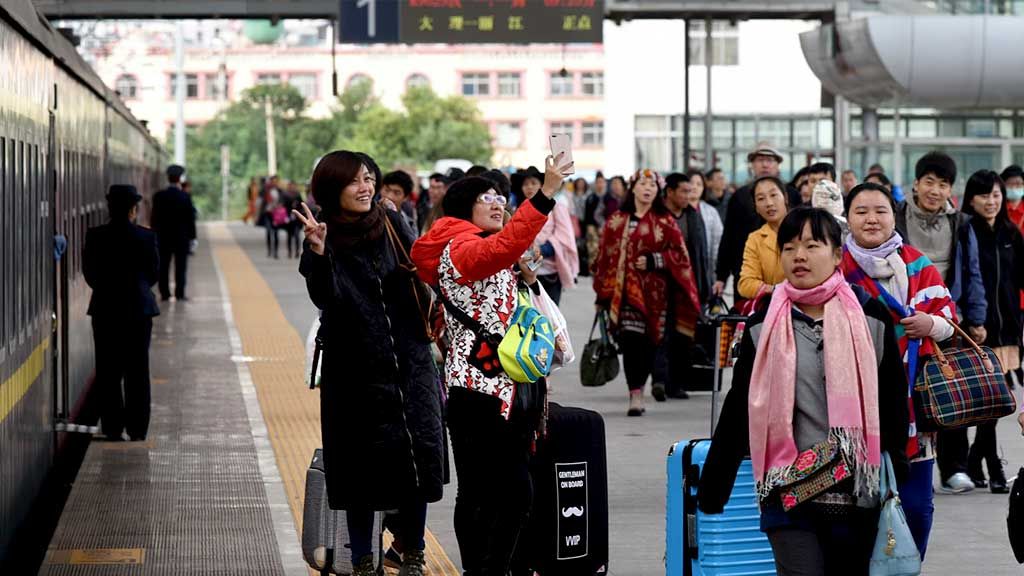 In the spectacular landscape of Yunnan Province in the People’s Republic of China, a railway is proving that ancient cultures, tourism, and economic progress can coexist.

More than 1 million people, 73% of them ethnic minorities, call this remote and beautiful region home, but the only way to get there used to involve an arduous 17-hour bus trip from the provincial capital of Kunming and a further 8 hours by road between the cities of Dali and Lijiang. This discouraged tourists and left the region cut off from mainstream development.

In an ambitious effort to improve living standards and promote economic development, the Government of the People’s Republic of China, Asian Development Bank (ADB), and Agence Française de Développement funded the Dali–Lijiang Railway Project to link the two cities. The railway would also connect the region via existing rail networks to the provincial capital of Kunming, and to Shanghai, Beijing, and beyond.

The 167-kilometer single-track railway began operating in January 2010, providing efficient, reliable, and affordable rail travel. Now people can travel between Dali and Lijiang in under 2 hours at half the cost of the bus. The trip from Kunming now takes just 9 hours.

Protecting the environment and culture

In addition to cutting travel times, the project is helping reduce greenhouse gas emissions as the railway cut road traffic. The design of the project ensured construction did not mar tourist spots or harm mountain slopes. The railway includes 77 bridges spanning rivers and gorges and 45 tunnels.

The project features a “green corridor” along the route that involved planting thousands of trees and using a special noise-reducing track in sensitive areas such as towns.

Many local people benefited from jobs during construction, which generated 88,000 person years of work.

In Heqing County, a new railway station has brought the development of tourism-related activities and sites with a rise in tourist arrivals of almost 500% during 2004–2011. Revenues from tourism have risen by 35 times.

Wang Mingzheng, director of Dali railway station, one of 11 stations on the line, sees firsthand the increase in people taking the train. “The number of daily passengers at our station has gone up from about 100 when the line opened in 2010 to about 2,000 today. The number of staff working at our station has increased from 25 in 2010 to 65, and 70% of them are women.”

Zhang Zeying, an ethnic minority woman and former farmer from Xiaoshuimei village in Heqing County, works as a cleaner at Heqing station and cooks for 15 staff. “I have worked at the station since it opened and I’m very happy with the job,” she says. With savings from her salary she plans to finish building the family house.

The project has lowered the cost of living for people in Lijiang and improved the availability of products. Wu Juan and her husband opened a 10-room hotel in Lijiang in 2010. Due to the larger numbers of tourists, their business has grown to 26 rooms and they have hired four staff.

Grocery store owner Yang Yubao says cheaper rail freight charges save him about CNY10,000 (about $1,530) a year. “I only need to arrange delivery from the railway station, instead of hiring trucks to pick up the rice from suppliers,” he adds. The railway project has been a powerful catalyst for economic growth. During 2004–2011, per capita rural incomes increased by 66% in the project area and poverty incidence fell from 30% in 2002 to 9% in 2010. The project has shown that with careful planning and execution, cultural preservation, economic development, and increased tourism can successfully coexist and benefit all.

“The railway is comfortable and convenient for local people,” says Duan Jianlin, director of Heqing station. “The train has shrunk the distance between them and the outside world.”

This article was originally published in Together We Deliver, a publication highlighting successful ADB projects across Asia and the Pacific that demonstrated development impacts, best practice, and innovation.