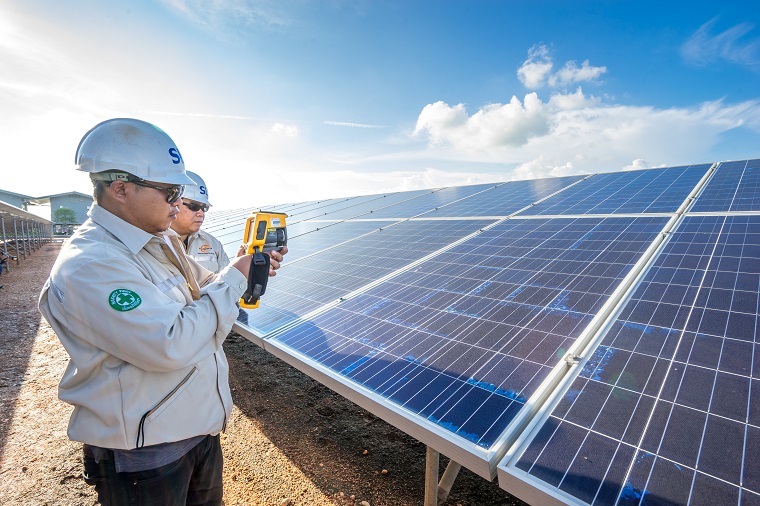 Cambodia, the Lao People’s Democratic Republic, Myanmar, Thailand, and Viet Nam—all members of the Greater Mekong Subregion—are seeking to expand the use of renewable energy. Here is where they stand:

The country has substantial solar resources that could be harnessed on a competitive basis and help achieve its electrification targets. The government, with international assistance, has installed more than 36,000 solar home systems as of 2016. There is a 10-megawatt solar power plant under construction in Bavet, Svay Rieng province and a 100 MW solar power park program under preparation.

The solar park project will be the first of its kind in Cambodia. It will support the construction of solar photovoltaic power plants and transmission facilities. It will also help build the capacity of electric utility Electricite du Cambodge for integration of renewable energy, including advanced technologies such as energy storage, into the national grid.

Wind energy, on the other hand, is limited by inadequate wind speeds and the weakness of the grid. Nonetheless, there are areas where wind energy would be commercially viable, as illustrated by a pilot wind turbine project in Sihanoukville. To scale up renewable energy, Cambodia needs to improve technical knowledge, craft more green energy policies, and source greater financing.

Lao People’s Democratic Republic. By 2025, the government wants 30% of the country’s energy needs to be sourced from renewables. Mini-hydropower projects will be the main contributor, but solar, wind, biomass, and biogas will also play a major role.

About 20,000 solar home systems have been installed in the country. It has also piloted hybrid solar-mini hydropower systems in rural areas.

Large-scale solar and wind systems are limited by gaps in the grid network and lack of connectivity for most of the rural population. This situation, though, means that small-scale solar or wind power is an option for those without other sources of electricity—albeit the cost of electricity would be high.

A cross-border power trade and distribution project under preparation will study the feasibility of combining on-grid options and off-grid alternatives, including renewables-based mini-grids, and battery storage, through a “least-cost” planning approach. Off-grid renewables may be a viable option in meeting rural electrification needs given Lao PDR’s large solar energy potential, and recent reductions in the cost of renewables-based electricity, especially for solar photovoltaic technology.

Myanmar. The renewable energy focus in Myanmar has been on hydropower with little of the country’s solar, wind, and biomass energy potential being developed. While large areas of Myanmar have high solar irradiation levels, the mountainous terrain, protected areas, and the limited grid system limit potential. No large-scale solar facilities have been built in the country, but solar-powered battery charging stations, solar lighting, solar home systems, and village solar mini-grids are common.

In 2014, Myanmar included a renewable energy strategy under its Rural Electrification Plan. It is now developing 1,500 MW in solar energy and 6,500 MW in wind power generation.

Thailand. To reduce dependency on imported energy and to lower emissions of greenhouse gases, Thailand’s national energy policy seeks to expand the use of renewable energy. The government seeks to increase the country’s use of alternative energy sources to 25% by 2021. This would be done through advances in solar and wind power, a doubling of biomass energy, and an increase in mini-hydropower. Thailand has excellent solar power potential. It has installed about 2,142 MW of solar power as of 2016. Its wind resources were at 224 MW capacity in 2014. The share of renewable energy in electricity generation has increased to 9.9% in 2014 from 5.9% in 2010.

Viet Nam. The government is placing stronger emphasis on renewable energy and on power market liberalization under the National Power Development Plan VII for 2016 to 2030. It will develop wind and solar energy and biomass production. Its renewable energy targets are set at 6.5% of the electricity production by 2020, 6.9% by 2025, and 10.7% by 2030.

Conditions favor wind power development in Viet Nam. There are suitable wind speeds in the southern coastal areas and offshore, and an extensive grid system. The declining cost of electricity generation by wind power—aided by government financial incentives—has made it a competitive alternative for hydropower, coal, and diesel. Installed wind capacity has increased rapidly. It is estimated that more than 1,000 residential wind turbines have been installed in Viet Nam since 2000. A number of large-scale, grid-connected wind projects are in the works. Solar energy continues to be costly, but an estimated 4,000 families have nonetheless installed home systems. About 20 MW of solar energy have been developed and another 470 MW are under various stages of development. The southern half of the country in particular enjoys relatively high solar irradiation levels.

Apart from Thailand, the Greater Mekong Subregion countries are at an early stage in developing their renewable energy resources. The GMS program is a key supporter of projects that help expand these resources and produce clean, efficient energy.

Renewable Energy Developments and Potential for the Greater Mekong Subregion