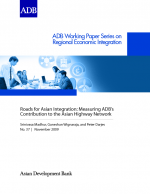 Against the backdrop of growing momentum for regional cooperation and integration (RCI) in Asia, this paper examines the link between regional roads and Asian Development Bank (ADB) support between 1966 and 2008.

The novel methodology used in this paper includes an Asia-wide definition of regional roads that fall on the Asian Highway (AH) network. The AH network is a system of about 140,000 kilometers (km) of standardized roads crisscrossing many Asian countries and with linkages to Europe.

The paper finds that regional highways have been a notable and growing part of ADB's road portfolio since the 1990s, particularly in ADB's subregional programs such as the Greater Mekong Subregion (GMS) and Central Asia Regional Economic Cooperation (CAREC) programs. It also finds that ADB road investment has made a significant contribution to the AH network, representing about two thirds of the network's core roads. While parts of the AH network have been completed, substantial gaps still exist, including an estimated $43.8 billion required for priority projects. As part of its mandate to promote better integration of Asian infrastructure, ADB may have a role to play in addressing the financing, planning, and institutional development of the AH network. Furthermore, strengthened coordination among ADB, UNESCAP, and other actors can enhance both the AH network and the process of regional road development in Asia.