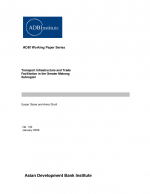 As trade is an important driver of growth and infrastructure is a necessity for trade, infrastructure development has a key role to play in economic development. This study aims to quantify the potential benefits of the development of the economic transport corridors, along with the implementation of the Cross-Border Transport Agreement (CBTA) in the Greater Mekong Subregion (GMS). Some of the key linkages between upgraded infrastructure, economic growth, and sectoral responses are explored using a computable general equilibrium (CGE) framework. The study provides a static view of one-off gains from a conservative estimate in a reduction in transport costs and improvements in trade facilitation. The findings show clear gains from improvements in physical land transport and the more substantial gains from improved trade facilitation. The results also provide a glimpse into the potential gains from intra-regional trade, highlighting the potential markets within the GMS. The implications of these results are that once a sufficient physical system is in place, additional benefits are marginal compared with improvements in policy initiatives under the heading of trade facilitation. While the GMS does not have the level of physical infrastructure that would be considered adequate for its desired level of economic activity, the results show that investing in soft aspects now still has substantial payback. In the future, as a greater physical base is put in place, the region should enjoy further benefits from expanded markets having a solid trade facilitation system in place. In sum, the CBTA and transport corridor development can significantly improve transit times and trade service costs, albeit with some drawbacks, throughout the region.